Toamasina, August 31, 2018. On Friday, August 31, 2018, Ambatovy paid the portion of its mining royalties due to the decentralized territorial collectivities affected by its operations, totaling 61,481,250,243 Ariary, which correspond to the last quarter of 2012 until the second quarter of 2018. These royalties are destined for 20 communes and two (2) regions in Ambatovy’s operating areas.

“Ambatovy is pleased to be able to pay its royalties, which have been long-awaited by the territorial decentralized collectivities. These new and important tax resources should significantly contribute to the real and sustainable development of the municipalities and regions where Ambatovy operates”, said Stuart Macnaug 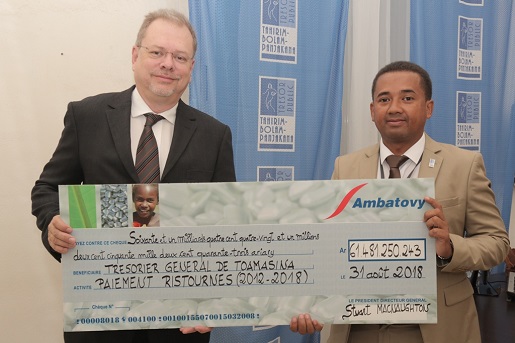 hton, Ambatovy’s President.
The recent publication of the regulatory texts defining the delimitation, the classification of the concerned communes and the distribution rates of the mining royalties for each commune enabled Ambatovy to determine and make this payment.

These texts distribute the royalties are as follows:

• 30% for the Malagasy State
• 10% for the National Equalization Fund
• 60% for the Decentralized territorial collectivities (CTD) which include the province, regions, and the 20 concerned communes.

The 61.4 billion Ariary paid includes the 10% for the National Equalization Fund and the 60% for the decentralized territorial collectivities.