Ambatovy’s mining and processing operations are located in Madagascar, an island in the Indian Ocean, off the east coast of Africa.

Our Mine Site is located near the town of Moramanga, in the Alaotra Mangoro Region, 80 km east of Madagascar’s capital. Slurried lateritic ore is delivered from the Mine Site via a 220 km Pipeline to a processing plant and refinery located near Toamasina on Madagascar’s east coast. At the Plant Site, the slurried ore is processed and refined to produce high-grade nickel and cobalt briquettes – small blocks of compressed metal – which are shipped to Ambatovy’s customers from the nearby Port of Toamasina.

The Mine Site is located 80 km east of Antananarivo, the capital of Madagascar, near the town of Moramanga. The Mine is only a few kilometers from the road and rail networks that connect it to the port city of Toamasina, on the east coast.

The ore body at the Mine consists of two large, weathered lateritic nickel deposits located approximately 3 km apart (the “Ambatovy Deposit” and the “Analamay Deposit”). Combined, the Ambatovy and Analamay Deposits constitute one of the world’s biggest lateritic nickel reserves, covering an area of about 1,600 ha, with depths ranging between 20 and 100 m. Ore is surface-mined by hydraulic excavators and delivered to the Ore Preparation Plant (OPP) in articulated haulage trucks. 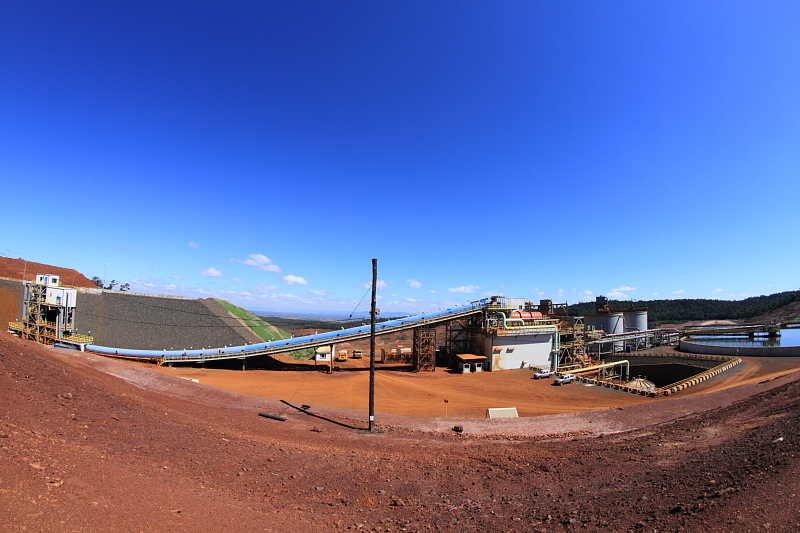 The OPP is located at the Mine Site and separates the soft lateritic soil from rock and waste material. The laterite is combined with water to produce a slurried ore, which is pumped into the pipeline that links the Mine to the Plant Site 220 km away. With the difference in elevation between the Mine and the Plant site, the design has maximized the use of gravity to minimize the need for energy-intensive pumping facilities.

Nearly 22,000 lengths of 60 cm pipe were welded together to construct the pipeline that connects the Mine to the Plant Site. The pipeline has a proven design, similar to pipelines operating elsewhere in the world, and has a capacity to transport 826 tonnes of slurried ore per hour.

From the Ore Preparation Plant, the slurry is pumped into the pipeline where it begins a 220 km, 30 hour, downhill journey to the Plant Site. Most of the energy needed to move the ore through the pipeline comes from the 1,000 m difference in elevation between the Mine and Plant Site.

For nearly all of its length, the pipeline is buried using standard “cut and cover” construction to an average depth of 1.5 m. In certain areas, Ambatovy drilled horizontally beneath the surface, leaving stretches of forest untouched, and allowing the pipeline to pass safely below Madagascar’s scenic rivers.

Extensive rehabilitation over the course of the pipeline is already returning the landscape to its natural state. 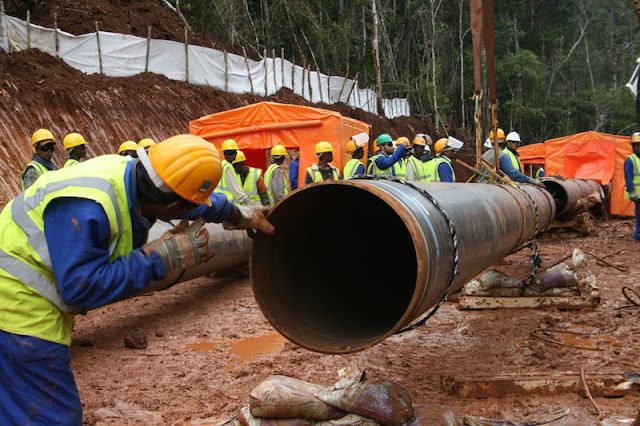 The Plant Site is a vast industrial complex covering more than 320 ha (or about the size of 250 football fields), and is located 11 km south of the Port of Toamasina. Facilities were designed, built, and now operate in accordance with Malagasy regulations and the World Bank Group’s International Finance Corporation Performance Standards.

At the Plant Site, the ore undergoes numerous steps – collectively known as the hydrometallurgical process – which ultimately yields refined nickel and cobalt, both of minimum 99.8% purity. As indicated by its name, the hydrometallurgical process makes use of water – and other chemical compounds – to progressively separate nickel and cobalt from the other materials present in the ore.

The tailings – residue with no commercial value left over after mining, processing, and refining – are neutralized and pumped from the Plant Site through a 15 km pipeline to the Tailings Site, a secure, stabilized area where the treated residue is deposited for permanent safekeeping.

Ambatovy’s Tailings Management Facility (TMF) is located approximately 10 km west of the Plant Site. The tailings – residue with no commercial value left over after mining, processing, and refining – are neutralized and pumped from the Plant Site through a 15 km pipeline to the Tailings Site, a secure, stabilized area where the treated residue is deposited for permanent safekeeping.

The Tailings Management Facility (TMF) was designed to meet international good practice standards including the requirements of the Canadian Dam Association and the International Commission on Large Dams. It is managed and monitored 24/7 by a dedicated team of engineers who are supported by independent consultants. An independent engineer of record carries out quarterly inspections, undertakes an annual audit of the TMF and produces a report for Management. In addition, an independent Geotechnical Review Board inspects the Facility on an annual basis and reviews operational reports, policies and procedures. The Facility is also inspected annually by the Malagasy government regulator, the ONE. We have also begun implementing the TSM’s Tailings Management Protocol.

Excess water from the Tailings is discharged into the ocean through a diffuser system designed to minimize localized impacts. A portion of this water is available to be reused at the Plant Site. When the Tailings Site has been filled, it will be reclaimed and drainage systems will be re-established.

The Tailings site was chosen because of its relatively low impact on the environment and local communities. Nevertheless, 154 families had to be relocated. This was carried out in accordance with IFC Performance Standards, and in close collaboration with community members.

Imported commodities – limestone, coal, sulphur, and ammonia- required for our operations total approximately 2.5 million tonnes, or nearly 9 times greater than the amount of finished goods to be exported. This huge volume required a substantial upgrading of the Port and Railway infrastructure of Toamasina, including:

As part of its design and construction efforts, Ambatovy worked in close collaboration with the local port authority and other businesses, all of which will continue to benefit significantly from these upgrades. Ambatovy’s port facility is certified under the International Ship and Port Facility (ISPS) Code, which is renewed every five years. To ensure our facility continuously conforms with the ISPS and maintains all the appropriate measures- including aligning with our internal Fatality Prevention Standards- we carry out frequent reviews of our operations for compliance and are also regularly inspected by the Malagasy Port Authority.

For the railway line, Ambatovy works in collaboration with the national railway operator MADARAIL (MADAgascar RAILway). Around 300 MADARAIL employees ensure the operation, maintenance and safety of the transportation of Ambatovy’s bulk materials via locomotive from the Port to the Plant site. Parts of the railway pass closely by communities, therefore the appropriate norms and standards have to be strictly followed in order to reduce the risk of incidents and accidents. The applicable norms and standards include:

Systematic audits by independent experts ensure that we maintain these standards throughout our operations. 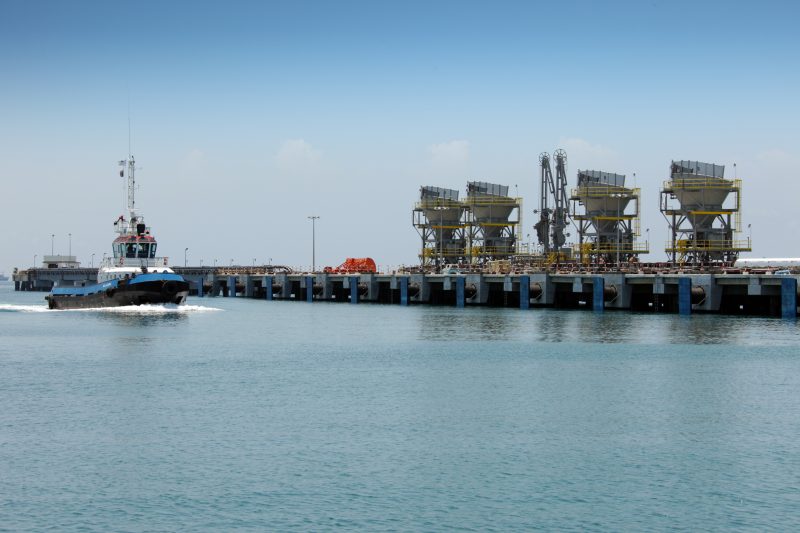 As one of the largest “greenfield” mining projects in the world at the time of its construction, Ambatovy had to make a substantial investment to establish the infrastructure required by a project of this size and complexity.

An ammonia storage facility was constructed approximately mid-way between the Port and the Plant Site. A pipeline transports the ammonia between the two locations. Like all of Ambatovy’s pipelines, this one has been buried to avoid tampering and to ensure safety and reliability.

Other major industrial facilities constructed by Ambatovy include:

For information on public infrastructure constructed with the support of Ambatovy, please click here.

We use cookies to give you the best online experience. Please let us know if you agree to all of these cookies. Privacy settings Yes, I agree
Go to Top