Archaeology at Ambatovy: Release of “A Look at Cultural Heritage”

A Look at Cultural Heritage provides an overview of the archaeological research undertaken on archaeological sites located between Mangoro and Ivondro. It is also a form of tribute to the work of other academic researchers. The author himself describes the book as “a contribution to the cultural history of the eastern region of Madagascar.” In addition to reporting on the many accomplished works, the book also tells the little-known stories from the Moramanga and Toamasina areas. As a reminder, the restitution of the work was already held in April 2011 at the Malagasy Academy.

Indeed, early in its establishment in Madagascar in 2005, Ambatovy committed to making a detailed survey of all existing cultural and religious sites in its future intervention areas in Moramanga and Toamasina. The Company’s archaeological team then began the surveys, during which archaeological rescue excavations sometimes had to be made. The work continued throughout Ambatovy’s construction phase (2007-2011), during which, many sacred sites, monuments, archaeological sites, and artifacts were discovered. In total, the team discovered about 5,000 different artifacts, including shreds of local pottery, glass, iron, or choritoschist, and all have undergone lab analyses. The oldest of the artifacts dates back to the twelfth century, while the most recent dates to the nineteenth or even early twentieth century. The 262 archaeological sites and monuments include burial sites, standing stones, and sacred posts, as well as holy and forbidden sites.

More than a simple scientific journal, this book mainly focuses on respect for Malagasy values, traditions, and culture, to which Ambatovy has been committed since the beginning in accordance with Performance Standard No. 8 of the International Finance Corporation. 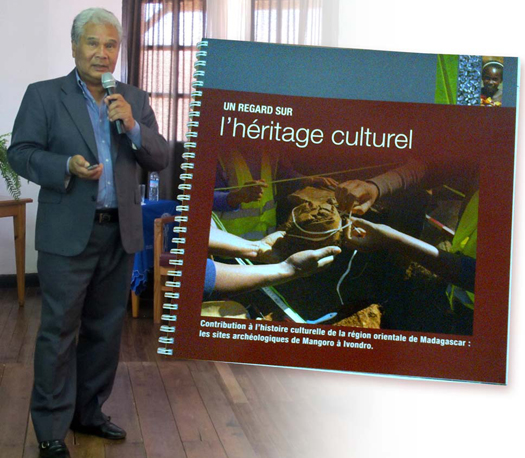 What prompted you to write this book?
In fact, this book concludes the many stages of the archaeological work that we have undertaken in collaboration with Ambatovy. Since the beginning, at that time the company was still called Dynatec, Ambatovy already had the principle of strictly respecting Malagasy culture, traditions, and values. All archaeological actors were already involved seven years ago, even before construction began. Research has not only focused on archaeological sites, but also on sacred sites according to the Malagasy culture: tombs, forbidden areas, jiro, fisokina … This book is a tribute to all the works carried out during this period. Such works were the fruit of a special collaboration between the Corporate Social Responsibility and the Communication departments of the company. But I want to emphasize that, although I am the author, this book is indeed a collective work with Ambatovy.

What will happen to all of these artifacts now?
They will be stored at the University of Tomasina, at CEREL, because it is important to note that these artifacts are not Ambatovy’s property: they belong to Madagascar. Therefore, they will soon be restituted to the Malagasy Government as soon as their cataloging is completed. Of course, they will be given to experienced specialists who will be in charge of their analysis. These objects are not intended to only be stored in cabinets, but, for example, will be used for research by students preparing their master’s degrees. Ambatovy is also ready to support if a student is serious and capable. Fanatics of historical research will also find it interesting because these artifacts disclose a lot of information.

After all these years of research at Ambatovy’s sites, in your opinion, what is the biggest conclusion to be taken from the work you have done?
Working with Ambatovy has brought many good things. But I think the most wonderful of all is that we now have formal evidence, through the 262 discovered archaeological sites, that the populations of the Highlands and the Coast have always been connected, whether in trade or in travels, since the twelfth century. And none of this was invented: there is formal evidence. We can show you how people from the East Coast moved to Moramanga, or how the population of Moramanga walked along the Mangoro River to get to the Ivondro River. That being said, I would like to emphasize that all these artifacts were discovered only along the path of Ambatovy’s pipeline. But, I can tell you that we are ready to excavate Alaotra – Mangoro to Analanjirofo, if we were given the financial and material resources to do so.

What was the highlight of your collaboration with Ambatovy?
I am very grateful to Ambatovy’s leaders for their collaboration. Not once has the company refused to comply with the requirements of local communities regarding respect for traditions and cultural sites. For the Pipeline, for example, Ambatovy agreed to deviate its path as many times as was necessary in order to avoid burial sites, other sacred sites, and fady locations, even though we know that there are thousands of fady sites in Madagascar. However, Ambatovy has always accepted. Additionally, Ambatovy has managed to be accepted by the population, solely through dialogue and exchanges. There is nothing harder than telling a Malagasy citizen that you want to touch his tomb. But Ambatovy completely respected Malagasy values and traditions. I can confirm that at no time have I seen desecration. Everything was always settled through negotiations, some of which lasted for up to a month, just for a deviation from footpaths leading to tombs. The Malagasy people have wisdom: once everything is cleared up, the problem is solved. And all the necessary expenses for any rituals were supported by Ambatovy without the smallest hesitation.

When will the book A Look at Cultural Heritage be available?
This book can already be downloaded for free. Those who do not have access to the Internet may also contact Ambatovy’s Communication Department. This book is for everyone, and our objective is to make it available to everyone who needs it. We are even thinking about releasing a Malagasy and an English version. You know, this book is only one step. But the work for the preservation of the archaeological and cultural heritage discovered by Ambatovy will not stop here. We still have plans to open a museum dedicated to such heritage, open to the general public and history lovers. And that is because this book is not to be preciously kept hidden or stored.